Today I had the honor of playing TAPS at the Vietnam Veterans Memorial in Washington, D.C.  The Stone Bridge Chapter of the Daughters of the American Revolution (DAR) from Loudoun, Virginia conducted this Wreath-Laying Ceremony.  April 30th is the actual day that the Vietnam War ended in 1975,  so it was a fitting date for Stone Bridge Chapter Regent Susan Postle to lead this memorial service honoring Vietnam War Veterans and Servicewomen.  Katharine Bischoff served as Chaplain for this service and led the group in prayer.  Visitors to the memorial were welcome to attend the ceremony and seemed to join in especially at the end when TAPS was sounded.  According to Vice Regent Kimberly Scott over 8 million military personnel served on active duty during the Vietnam Era, between August 1964 to May 1975.

The names inscribed on the memorial’s wall as of today number 58,272..and represent the fallen including those Missing in Action, Prisoners of War and others.    In addition to the wall that was dedicated in 1982, there are two statues: The Three Servicemen Statue and Women’s Memorial which were added in 1984 and 1993 respectively.  According to Stone Bridge Historian Sherryl Belinsky over 265,000 women served our country during the Vietnam War.  The great majority of women who served in Vietnam were nurses.

The Three Servicemen with wreaths. 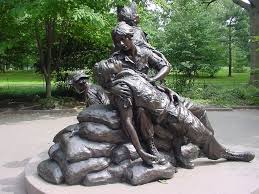 The Vietnam Women’s Memorial is a short distance south of the memorial wall.

After the ceremony, we walked the entire memorial and I had my photograph taken with the reflecting pond and Washington Monument in the background.   It was cool and overcast but the clouds held off until we left.

Back home in Virginia: The DAR gave my family this beautiful flower arrangement.

There is no greater honor than to play TAPS for our Veterans.  I look forward to continuing my service with the Stone Bridge DAR.